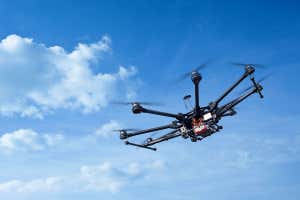 Drones can sometimes be a nuisance, but here’s one that’s downright helpful. An octocopter equipped with a nail gun can fly up and fix the roof autonomously, so you don’t have to.

Ella Atkins at the University of Michigan in Ann Arbor was inspired to design the system after having to repair her own roof years ago.

She and her colleagues modified the drone by attaching a nail gun. Then a ground-based motion-sensing system tracked the exact position of the drone as it was put to work. Using that tracking information, the drone autonomously hovered over a mocked up roof and showed it could successfully nail down a series of flexible roof tiles.

Roofing drone equipped with nail gun fixes the roof
A drone with a nail gun might sound scary, but it shouldn’t go around firing nails from the air. The firing mechanism is only unlocked by pressing on the gun’s tooltip on a surface.

It also shouldn’t go awry when the nail is fired because there is only slight recoil from the gun. “It has force, but only for a very brief amount of time, which means that a fairly substantial octocopter like we’re flying only sees a blip in its motion,” says Atkins.

She says drones are not likely to decimate jobs in the roofing industry. Even if drones were widely used, they would still need lots of human support, for preparing the drones’ tools and materials.

For commercial uses, the drone would ideally be fitted with a power cord and pneumatic air supply so that it could fly longer and use a professional-grade nail gun, she adds.

These adjustments shouldn’t be too hard to make, says Steve Wright at the University of the West of England in Bristol, UK.

“What they’ve done is really quite spectacular,” he says. He points out that getting a drone to hold still, especially while pushing against a surface, is difficult.

He says that the next wave of drone innovation will involve drones more commonly making physical contact with objects. “There is a fortune to be made out of all of this,” he says.